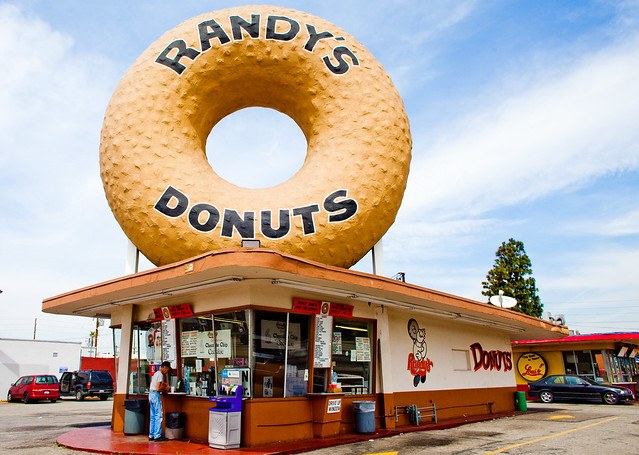 Over the weekend I had to drive to LAX and I decided that while I was there I would go to see a landmark that has loomed in the background of many movies. The landmark is Randy’s Donuts. You may not recognize the name but I’m sure you’d recognize the giant donut that is posted above the shop and has appeared in many movies including Iron Man 2 and Dope.

Randy’s Donuts was built in 1953 and was part of the Big Donut Drive In chain, which consisted of 10 locations and was started by Russell C. Wendell. However, 5 locations have been demolished. In the 1970’s the donut shops were sold so Wendell could focus on his new taco chain, later to be bought by Taco Bell. Robert Eskow purchased the location in Inglewood in 1976 and named it Randy’s Donuts and Sandwiches. In 1978, Ron and Larry Weintraub purchased Randy’s and kept the name. they own it to this day.

Randy’s Donuts’ iconic symbol can be seen throughout popular culture and is referenced through music, movies, and TV. It has been referenced in  movies including Iron Man 2, Dope, 2012, and Crocodile Dundee Escape to Los Angeles with many more movies. It also appeared in Red Hot Chili Peppers song Californication, and has appeared in shows such as Futurama and Nickelodian’s Victorious. However, there are other references to the iconic donut without giving credit to the name, including videogame Grand Theft Auto: San Andreas, the show The Simpsons, and even in the movie Wayne’s World.

These are just a few of the references and appearances of the iconic donut of Randy’s Donuts. It has become an iconic landmark for Los Angeles, specifically Inglewood, and provides a proud monument for an otherwise poor neighborhood. The giant donut is something that is easily recognizable and draws attraction to the store and thus the city. It is such an oddity that it has been romanticized and popularized beyond belief and will probably remain as an important part of popular culture.